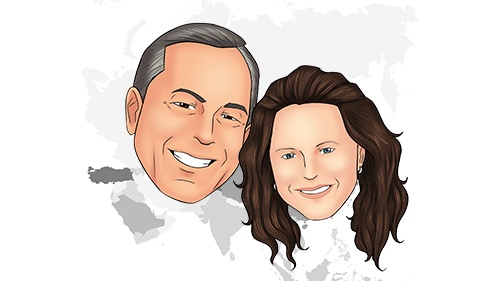 Alan Bourne was raised in Colorado. He earned an undergraduate degree in Chemistry, and then went on to earn his doctorate as a chiropractor. He later received his Post-Doc certification in Orthopedics. Alan and Pearl married in 1982 while Alan was in graduate school and Pearl was a registered nurse.  After Alan’s graduation, they moved to Boulder, Colorado, where they lived and practiced until the summer of 1990. That summer, Alan and Pearl went to India on a six-month trip to work with Muslims and look at a variety of community development projects. They returned from India at the end of that project with the desire to return. Early in 1991, Alan went back to graduate school at Trinity Seminary, studying for an MDiv. in Missions and finished this degree in 1994. They then moved to India in 1995.

We lived and worked in India for 11 years, working with a team of expatriate and Indian Christians to do church planting among Muslim peoples in North India. Over those 11 years, we helped with a large variety of Christian community development projects throughout South Asia.

In 2006, the family moved back to the U.S. where Alan was director of a small non-profit marketing arm of his sending organization. He managed the buying of hand-crafted items from various groups around the world, selling those items and sending the profits back to the artisans. In 2012, God opened the door for the Bournes to start and lead an international resource team (with the same sending organization). This team helps start new mission mobilizations and sending offices in a variety of countries to train and send people to other parts of the world to work on or start new teams. During this time, the family was based in Thailand. In early 2016, the Bournes moved out of their first sending organization and began working with a new organization. Alan is the International Chairman of their International Leadership Team. This new organization works with local churches and Christian ministries to help them engage with refugee and displaced peoples initially through educating their children. In late 2016, the Bournes completed the adoption of their Thai son but could not immigrate him into the U.S. until the fall of 2018. Feeling the need to be near their aging parents, they decided to move closer to the U.S. and transitioned to Mexico. In 2019, the Bournes moved to Colorado. The Bournes also have two older daughters.